The (ICARE)/CATHARE system code was originally developed by IRSN to meet requirements in light water reactor safety analysis (PWR1, VVER2, EPR3, etc.) and level 2 probabilistic safety analysis (PSA). This system resulted from the combination of the ICARE2 mechanistic code for core degradation developed by IRSN and the CATHARE2 thermohydraulic corde developed in collaboration by CEA, IRSN, EDF and AREVA. This system is also an excellent synthesis tool for all phenomenological knowledge on core degradation.

ICARE/CATHARE is designed to: evaluate the consequences of a severe accident upon the primary system of a PWR (from the initiating event to vessel failure) interpret experimental programmes conducted by IRSN and french ans international partners.

The code is composed of a series of modules that each deal with a specific phenomenon : thermohydraulics, thermics, mechanics, chemistry, fission products, movement of materials, debris beds, core meltdown, etc. The V1 version is used for IRSN level 2 PSAs applied to 900 MWe reactors. The V2 version combined with a 3D thermohydraulic model is currently under development and simulates all physical phenomena, including vessel failure.

The system is designed to facilitate the integration of new models and perform calculations both for experimental programmes and reactors.

The validation phase carried out in partnership with about ten foreign organisations includes :

Reactor sequence calculations, including a detailed analysis of the TMI-2 accident intended to consolidate the system for future reactor applications. Most of the thermohydraulic models benefit from the validation of the CATHARE code. 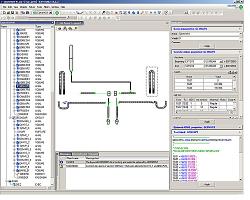 Development is achieved in a high-level scientific environment: fundamental research (theses & post doctoral studies), collaboration with universities and French & foreign research organisations [(CEA, IMFT/Toulouse, Kurchatov & IBRAE Institutes (Russia), ENEA (Italy), etc.)], not to mention participation in several European R&TD Framework Programmes and international projects (OECD MASCA). International seminars for the Users' Club are held on a regular occasion and unite about fifty users from various different countries. Efforts in modelling are currently focusing on the reflooding of a severely degraded core. The field of application can be extended to cover other types of reactors (RBMK, gas-cooled reactors, etc.). In the long run, the ICARE2 code will be integrated into the ASTEC code system.