The aim of project is to describe phenomena and calculate thermal-hydraulic characteristic parameters in fuel assembly for European Pressurized Reactor - EPR. This evolutionary project of Areva concern, was designed basing on a couple of years of experience with pressurized reactors. It will be demonstration of first III generation reactor in the world. In this project general view of reactor was described, especially the primary side and particular main elements such as reactor pressure vessel, steam generator and pressurizer. The main object of interest was the fuel assembly, which creates the heart of the reactor - the core. 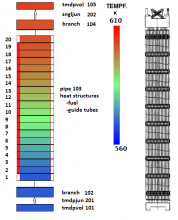 EPR is generation Nodalizacja i schemat kasety paliwowejIII reactor and it is characterized by very low probability of core meltdown. To obtain this result, it was designed with additional safety systems, quadruple multiplication, facility diversification, doubled containment and in case of severe accident- an innovative core catcher. The aim of the design, was to create safe reactor, which produces 1650MW clear and ecological electricity with high efficiency for 60 years.

To perform thermal-hydraulic calculations the system code RELAP5 was used. This code allows to simulate steady states and transient in reactor applications. It is also appropriate, as calculation tool, during loss of coolant accident in light water reactors. Main calculation modules used in RELAP5 were described. The fuel assembly model was presented with nodalization, (figure 1). and input file, which is necessary to run calculations.

n document three calculations of steady state were performed: nominal steady state, coolant flow decreased to 60% of nominal flow, and change in axial power profile for the end of fuel life with 50% of nominal power. The transient simulates a linearly decreasing flow of coolant as long as new level is stabilized and SCRAM occurs. All of the obtained results, which were presented in graphs and tables, were analyzed and commented. Example of coolant temperature along fuel assembly during first steady-state show figure 1. Transients gave many interesting results: coolant temperatures, cladding and fuel temperatures distribution, pressure and velocity along the channel. Especially void fraction changes are very useful, because they map water level in the core.

To check correctness of received results, author compared them with the reactor technical documentation. Steady states results are very similar to the designed data. The hypothetical transient showed how important role the correct cooling plays in the reactor. The analysis indicated the consequences of the coolant flow limitations during the reactor operation.