It can simulate the behavior of different types of fuel, such as UO2 and MOX, with different cladding materials, such as Zr-4 and M5, in an experimental environment – a setup generally limited to a few rods surrounded by a shroud – as well as that of an actual 17x17 assembly, as in the case of a French PWR (Pressurized Water Reactor).

The code is also able to study the deformation and re-flooding of a fuel rod assembly in three-dimensional geometry during a loss of coolant accident (from which the acronym is derived in French). 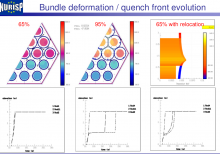