The aim of the project is to calculate the isotopic inventory for spent fuel, which is consisting of the UO2 pellets. The results of the calculations will be used in the for the educational purposes.

Calculation was carried out for pressurized water reactor, especially for several fuel assemblies which have different initial enrichment and different location of pins in assembly. The assemblies are located in the reactor core, some of which are including the burnable poison Gadolinium. The addition of the Gadolinium is made for the power control of the initial reactor start up. The given fuel isotopic concentrations are the initial values and the key effect on the final concentrations depend on the operating conditions, the calculations assumed full power operation during whole cycle.

Calculation of the isotopic concentrations for the each assembly were done using the DRAGON4.05 code, which is the code created by the École Polytechnique de Montréal. DRAGON is the code consisting of the different models and algorithms used to solve the neutron transport equation. Models were compared with IAEA PWR assembly benchmark [2] and the results are in good agreements with the data.

The project includes the creation of the fuel assembly of the PWR core model. The model was done by the implementation of the data found in [1]. All geometrical data and material definitions were introduced to the code by calling respective modules.

First step of project was the calculation of amount created actinides and other isotopes during fuel campaign. The multiplication factor (keff) was calculated as well as neutron multi-group energy spectrum. The examples of the results are presented in the figures below. 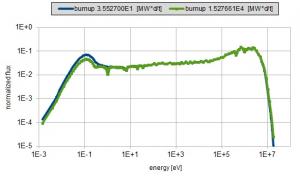 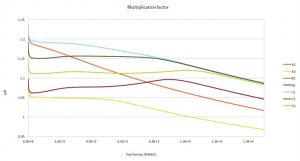