Our professional staff is our greatest asset. Highly-qualified IT experts are constantly updating their knowledge. Their competences, expertise and involvement help them to be up to high expectations of the market. You can be assured that services offered by such a team will be professional at every inch and at the highest quality level. Wojciech Wiślicki was born in 1958, is an ordinary professor, PhD and DSc in physics. He works at the Pure Research Department, National Centre for Nuclear Research.

He graduated from the Faculty of Physics, Warsaw University, specializes in high-energy physics and particle physics, complex systems and large-scale information processing in network computing.

Since 1991 a regular contributor to CERN Geneva, where he focuses on the spin structure of nucleons (SMC and COMPASS collaborations, first measurement of the flavor and color vacuum polarization in the nucleon) and neutral kaons physics, in particular the measurement of direct CP violation and rare kaon decays (NA48 collaboration). Recently he joined the LHCB Collaboration.

Within the KLOE/KLOE-2 experiment since 2008 he works with the Italian Istituto Nazionale di Fisica Nucleare (INFN) in Frascati, where he conducts research on the quantum decoherence in entangled neutral kaon systems.

At the same time deals with the theory, simulations and applications of complex systems. Particularly he is interested in issues related to the thermodynamics of networks of agents systems and multi-agent games.

In the years 2001-2012 he led a team developing a network to grid computing and services, also for the use of the great experiments in high-energy physics at the Large Hadron Collider at CERN.

Since 2009 he is head of the Świerk Computing Centre - project carried out at the National Centre for Nuclear Research (NCBJ). Its aim is to provide IT support for Polish nuclear energy and related fields of science and technology.

He also performs didactic activity. In NCBJ ( previously at the Institute for Nuclear Studies), Warsaw University and Warsaw University of Technology he conducts lectures and exercises in probabilistic mathematics as well as particle and nuclear physics. He also coaches MSc and PhD theses in these areas. 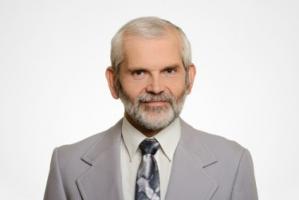 Graduated from the Faculty of Technical Physics and Applied Mathematics of the Warsaw University of Technology (speciality: applied mathematics, specialization: numerical analysis).

His occupational career started in 1986 at the Institute of Atomic Energy (IAE). Since 2000 Deputy Chief of the Centre of Excellence MANHAZ (Management of Health and Environmental Hazards) of IAE.

In 2006-2010 delegated as national expert to the Institute for Environment and Sustainability, Ispra Italy, a part of the Joint Research Centre – one of the General Directorates of the European Commission.

Specializing in problems related to modelling of releases and propagation of dangerous substances in environment; advanced informatics tools for crisis management, including decision support systems; methods of risk assessments for nuclear and chemical installation. Interested in numerical methods, high performance computing, and techniques of parallel and distributed processing.

Author of a number of articles and monographs. Participated in the development and implementation of advanced computer systems, including decision support system for nuclear emergencies RODOS, the ENSEMBLE system for analysis and evaluation of atmospheric dispersion models, both developed within UE programmes. He is co-author of the crisis management system for dangerous chemical plants and the system for preparation of emergency plans in case of major chemical accidents. 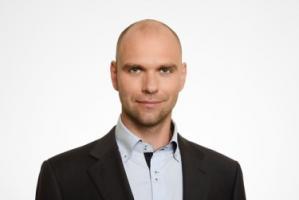 In the years 2004 - 2010 he participated in a number of European projects aimed at building computing grid: CrossGrid, Enabling Grids for E-Science I, II and III, PlGrid, which were carried out by the Warsaw University and Institute for Nuclear Studies. In these projects he was responsible for network infrastructure of Warsaw grid cluster as well as design and implementation of grid monitoring tools. Being one of the key people in these projects he contributed to the global computing infrastructure Worldwide LHC Computing Grid, which currently supports scientific experiments conducted at the Large Hadron Collider at the European Organization for Nuclear Research CERN.

In 2006 he started his doctoral studies in International Doctor's College conducted jointly by the Interdisciplinary Centre for Mathematical and Computational Modelling of Warsaw University and the analogous institute at the Ruprecht Karl University of Heidelberg. He took a multi-agent game theory, the study of which gave original scientific results. In 2007 he was in Santa-Fe Institute, where he worked in the field of complex systems together with prof. Doyne Farmer.

Since 2010 works at the National Centre for Nuclear Research. He is one of the founders of Świerk Computing Centre, where from the ground up he built Network Security Team. Since 2012, he builds a team working on complex systems and taking scientific tasks related to energy distribution networks. Currently, in collaboration with PSE Operator, he deals with the problems of electricity market division into zones and optimization of power distribution. 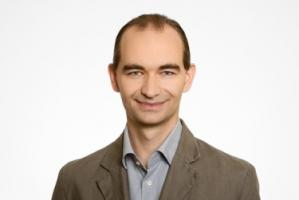 He studied at the Faculty of Electronics and Information Technology of the Warsaw University of Technology. He graduated in 2002, receiving the highest grade and rector's distinction. His research interests are focused mainly on distributed computing architectures and metaheuristic optimization algorithms. In 2013 he defended with distinction his doctoral thesis titled "Distributed evolutionary algorithms for optimization of data classification in High Energy Physics experiments".

In years 2001 – 2012 involved in COMPASS (COmmon Muon Proton Apparatus for Structure and Spectroscopy) experiment which is carried out at European Organization for Nuclear Research (CERN). The experiment is focused on studying the hadron structure and hadron spectroscopy with high energy hadron and muon beams. Adam Padée worked on optimization tools for offline data processing software. He was also responsible for deployment of distributed grid resources for COMPASS and for making COMPASS software work on these resources. His work on both of these fields resulted in creation of a special architecture of evolutionary algorithm which is able to adapt to the dynamic grid structure and is not affected by low bandwidth of WAN connections between the grid clusters. The algorithm has been described in his doctoral thesis and several publications.

Since 2002 participating in series of projects aimed at creation of computational grid infrastructure in Europe. Beginning in CrossGrid, through Enabling Grids for E-sciencE, Int.Eu.Grid and PlGrid, he was involved in creation and deployment of grid middleware, maintenance of the resources and support for the application developers. He has been one of the key members of the team building Polish part of the Worldwide LHC Computing Grid (WLCG), a distributed computing infrastructure supporting Large Hadron Collider experiments conducted at CERN.

Since 2009 he has been working for the National Centre for Nuclear Research. He was one of the founders of Świerk Computing Centre. Currently he is the head of the Computing Infrastructure Team, responsible for procurements of new hardware, configuration of the computing environment for scientific applications and everyday administration. His group is also involved in algorithmic support of the application teams as well as developing new methods and working on existing ones to adapt them to large, distributed computing environments.